Xavier was super psyched about his first Saturday off work in quite some time, and he really wanted to test out his brand new camera. His girlfriend May invited him to hit the pool, and the two headed out to the patio. May was a super cute Asian GF with a sexy body. While Xavier filmed May by the pool, she took off her jean shorts to reveal her hot Asian ass. May told him she just wanted to tan and actually sunbathe topless. She was hesitant about neighbors seeing, but quickly took off her top to reveal those plump Asian tits and delicious dark nipples. May was so excited he was finally home for the weekend that she even gave him a quick twerk show in the pool. That got her horny, so she really took the reward to a whole new level and gave Xavier some amazing head by the pool. He returned the favor before this couple decided to have sex right there on the patio. Xavier pounded that hot and tight little Asian pussy of May’s deep and hard. She worked that dick like only a crazy Asian GF could until she sucked every last drop of cum right out of his cock. 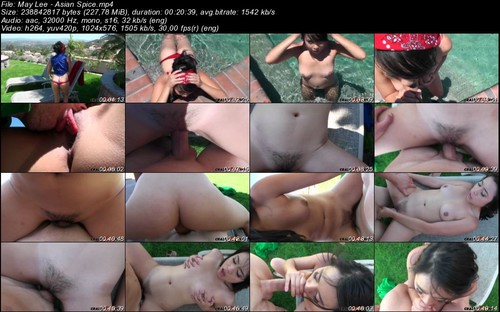